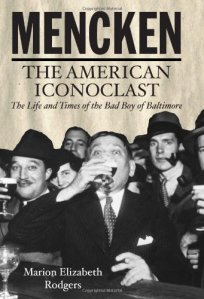 At the start of her lecture to a packed room at the Baltimore Bar Library on February 8, Marion Elizabeth Rodgers, author of Mencken: The American Iconoclast, mentioned the wine reception immediately following the talk.

“On such occasions,” she said, “I am reminded of one of Mencken’s favorite doctrines, that ‘the whole world would be better if the human race was kept gently stewed’ … which brings me to the topic of this evening.”

Rodgers kept the audience laughing throughout her lecture on “Mencken, Ritchie and Prohibition.” Her focus: how a driving force behind the repeal of Prohibition was a combination of the independent character of the state of Maryland, the 42 newspaper columns Mencken wrote against Prohibition, and Governor Albert Ritchie’s stand against enforcing the anti-liquor law.

In 1920, H.L. Mencken began writing against Prohibition in his weekly column for the Evening Sun. Governor Ritchie was a regular visitor of Sun offices and began to agree with the anti-Prohibition ideas.  When Ritchie attended a Governor’s Conference in DC, he was the only governor to protest the requirement that states enforce Prohibition, a policy that Ritchie called a federal infringement on Maryland’s rights. Interestingly, Maryland never had a state enforcement act for Prohibition.

Rodgers provided fascinating details about life in Maryland during Prohibition. According to Rodgers, by the end of Prohibition, Maryland was “one of the wettest states in the Union.” Ritchie announced that state troopers would not bother places selling alcohol in Maryland. Speakeasies were declared to be “cigar stores” with a door in the back with a window; when you knocked on the door and said, “Joe sent me,” you’d be let right in.

Another interesting fact was that many people brewed their own beer in Baltimore during the time because alcohol was very expensive. In some neighborhoods, the air on Sundays would smell deeply of hops and malt. Mencken brewed his own beer each Sunday; the guinea pigs for his brew experiments were often the musicians of the Saturday Night Club.

Rodgers mentioned that Ken Burns is currently producing a documentary about Prohibition, which should focus in part on Mencken and Baltimore, as well. That documentary is scheduled to be aired in December.

The growing friendship between Mencken and Ritchie, particularly through a failed bid for the Democratic presidential nomination, was described beautifully by Rodgers.  Her meticulous book, Mencken: The American Iconoclast, is widely known as H.L. Mencken’s definitive biography. Additionally, when speaking about Mencken, Rodgers’ enthusiasm for the subject is contagious.

Many thanks to the Bar Library for another successful program!